On this page we have a list of Parish Actions that have been sent to CFM USA done by members of our local action (parish) groups: 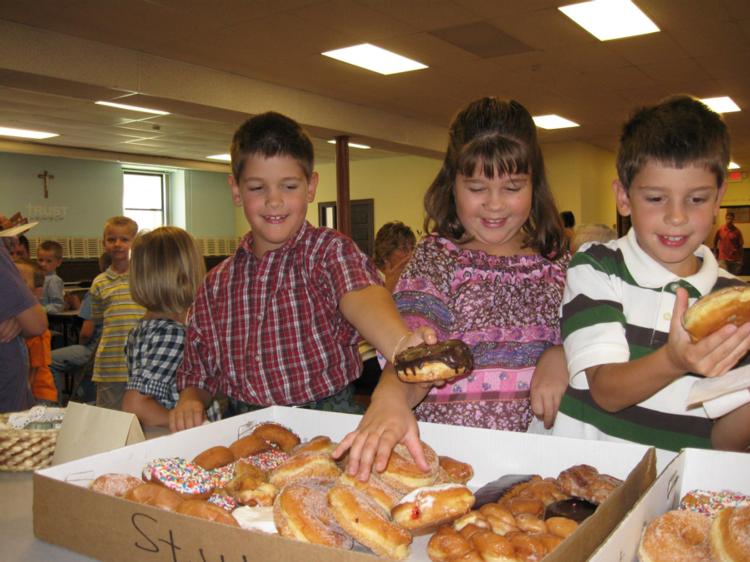 On the Feast of the Holy Family, December 29, 2002 CFM presented their parish a statue of the Holy Family. The gift was made possible by the Holy Family Ministry after the St. Lawrence Martyr community purchased 100 of the miniature versions of the same statue. During the presentation, Noreen Thomas (shown in photo with Dan, her husband and their three children) spoke of family values and shared with the parish the current 3-point mission of the Christian Family Movement.

CFM activities were highlighted in the bulletin for Holy Family Sunday. "We support, what we lovingly call "Donut Duty" each Sunday after the 9 am mass. We are active in support of the parish dance, picnic, the Lenten soup supper and, of course, the parish Easter Egg Hunt every Easter Sunday."

She has started a teen group in her parish in response to reading an article in the August issue of ACT. The group is using the book, In Search of Jesus.

Sponsors a parents' night out. Adults and teens baby-sit the children of couples in the parish so that they can enjoy some time alone.

Group provided most of the staff of the parish vacation Bible school this summer. 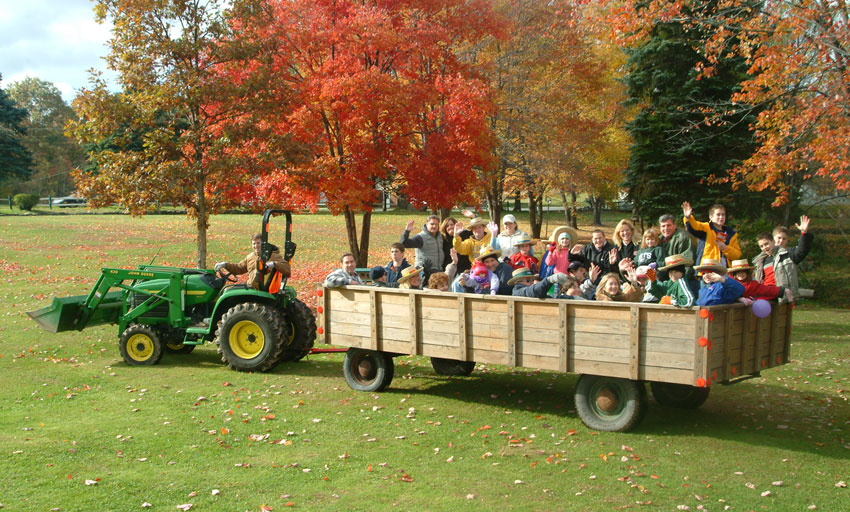 Group sponsored a reception after Thanksgiving Day Mass last year. They also had a hayride in the fall and a Seder meal in the spring.

Hosts monthly coffee for the parish. In November they celebrated Mass and collected over $2400 to pay for turkeys distributed at an inner city parish.

Group joined with the Health Care Committee at nearby St. James to host a volleyball tournament for charity. Fourteen teams registered. The event was the brainchild of CFMer Michelle Elpers, who enlisted the assistance of the youth group to referee, keep score and provide child care. The event raised $600 through team fees, concessions and raffles. In addition, several participants inquired about joining CFM.

Group leads the parish in a Family Way of the Cross one of the weeks of Lent. They also host a parish family games night in mid-winter. The group enjoys camping and attending a local amusement park as summer activities. 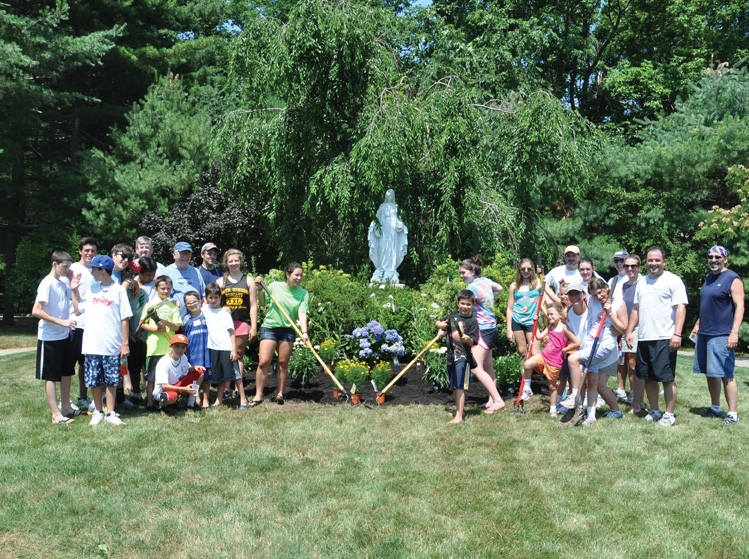 "We are planning a family retreat on April 4-5, 2003. The theme is 'Peace in the Puzzle'. Friday night will be an evening for couples only. We are exploring the ideas of peace and forgiveness in the sacrament of marriage. Saturday will be a family day exploring similar ideas in a family context.

Group led in organizing a town hall meeting on pedophilia that was attended by 200 people last summer. The meeting provided a forum for the sharing on varying concerns. Some were quite angry; some just wanted to show support for their priests. "It was a powerful evening, and has led to subsequent townhall meeting on other topics, including our recently concluded parish survey." 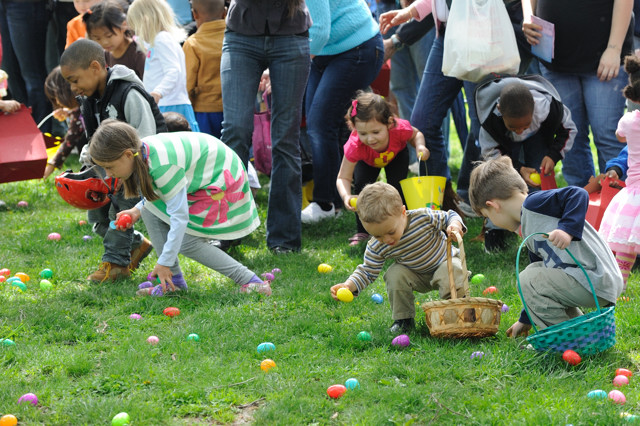 Suze St. John at Our Lady of Guadalupe in Redondo Beach, CA

Created a Talent Bank Book offering services to other families, such as babysitting, tutoring, sewing, etc, Our spring events include the Eldorado Nature hike in Long Beach; an Easter egg hunt and BBQ at Wilderness Park in Redondo Beach.; Malaga Cove tide pool hike in Rancho Palos Verdes and camping trips are planned for the summer months in Ojai and Malibu.

After three years of waiting to conceive, Joe and Mary McHale were ready to embark on the exciting adventure of parenting their newborn son, Danny, to adulthood. At his six-month checkup they were not ready to hear the news that he had a disease that would likely take his life before he was two. Thanks to good medical care, and the prayer and support of a caring CFM community Danny is about to celebrate his third birthday, confounding the medical experts who said it would not happen. His mom, Mary McHale says, "Danny's been a miracle since day one."

Danny suffers from Spinal Muscular Atrophy. Totally unaware of it when their child was born, Joe and Mary have become experts on the characteristics of the condition. They say SMA is the leading genetic killer of children under two. One in 40 people carry the autosomal recessive gene that causes it. One in 6,000 children are born with it each year. Most children diagnosed with the disease die within six months.

The couple had just joined CFM, but their group at St. Joan of Arc in Danville, CA, rallied around them. In addition to meals and other forms of physical support, they organized the first of many prayer vigils to help the couple through this experience. Mary recounts she "came to a sense of peace" as a result of the first vigil. "I knew it was going to be okay. It was like a huge boulder came off our shoulders."

For the first ten to 15 months, the couple took one day at a time. "We just said 'Thank you God for another day with Daniel.' That feels so far away now."

In an effort to help find a cure for SMA to help Danny and others like him, the McHales have raised over $100,000 for research in the last three years. The CFM group has reached out to make that possible. They had a pancake breakfast that raised $10,000. In 2001 one parishioner had a concert and auction in his backyard that netted $7,000. This past year the event brought in $17,000. In each of these events "the CFM group has pitched in and been the backbone of it," Mary said.

As his third birthday approaches on February 11, Mary said, "We're living in hope, rather than in despair." The McHales feel like they have to share the news that God is working in their lives.

In the time since his diagnosis Danny has received physical therapy to help him maximize his abilities. The McHales make sure he has medical care from people who believe in treating him for the future, not just taking care of him until he dies. They are taking advantage of the scientific advances as they come along. They also believe in the power of prayer.

Recently Danny's condition has been reevaluated. After originally diagnosing Danny as having the most serious form of the condition, doctors have upgraded his case to a less debilitating form of SMA. His current prognosis is that he will live into his teens, and possibly 20 years. "He's just a miracle kid. He can hold a marker. He learned to count to ten in French in one week. He has a great sense of humor." One thing that has made a big difference in his life is his power wheel chair. The person who fitted him for his chair said he was the youngest person he had ever worked with. Mary said, "His independence makes a big difference in his attitude. He's a kid with a weak body, but a smart brain."

Mary keeps touch with the network of friends who pray for Danny by e-mail. She sends a newsletter to about 250 people who each send it to ten or 20 friends. People around the world pray for Danny. Strangers frequently tell Mary, "We're praying for your son." Mary muses that "Maybe this is God's mission for Danny, to let people know there is a God who cares."

"Danny's favorite place to go is church," Mary says. "He likes to hang out with his friends." Danny and the journey of his family have been a big part of the faith community at St. Joan of Arc. "We don't want to be treated as a pity case. We want to be treated as ordinary people having ordinary lives in extraordinary circumstances. We love being Danny's parents."

One incident that sums up the last three years is an exchange Mary had at a CFM camping trip this past summer. When she introduced herself as Danny's mother, the child responded, "Is he the boy who used to be sick?"